Two works
Blanchot would speak of two works, the laborious work and the unworked work. The burden of the production of equivalency, the burden of the imperative of the unequivocal. Always burdensome, but in differing measures.

The unequivocal, a gesture of inoperativity. An act of making without equation whilst resisting the demands of making a work. Making, away from a totalising logic, away from identification as associational tool.

Equivalency, simply a work. Injection-moulded ease of pre-packed exchange. The substrate of a calculable world, where ‘this equals that’ measures out a strange rhythmic procedure.

Labourious and unworked. Two works and two kinds of economy. One of equivalency and one of a limitless disruption. The question of two ends generative of two things: exchangeability and resistance.

Equivalence, disruption. When talking of perverse labour and the destructive constitution of community this division must be held in thought. Refusing labourious equivalency is embracing the languorous freedom of the inoperative. The work of continual destruction and production is a circular embrace of the refusal of the economic as decisive structure. Acting out the recuperative potency of a labourious work, the perpetual gesture of re-integration is drawn out in its most basic terms. Thus the question: how to work without making a work?

The fragment, an act of disruption, destructive liberty. All possible replies and all play a role of resistance. It is not a question here of an absolute response. The necessity of responding is captured within the fragment as a form of resistance. A shattered kind of interruption. Again and again and again, so goes the procedure. An immanent circuitousness which operates as a repetitive exposure. But through this fragmentation repetition loses sync, becomes a kind of arrhythmic syncopation in which the economic gesture is out of time and so becomes absurd. Destruction, reconstruction, out of time circularity, not to mention the confounding object at the heart of it all. 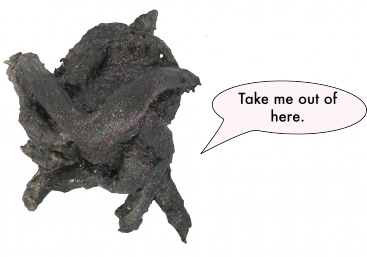