Sharing
Object re-making community. A principle of inversion at work here: not state, urbanity, house, furniture, object, but object, furniture, house etc. Articulation of dwelling, of a place in the world not from above but from an insistent act below. Embodied in this gesture of destruction and re-production is a resistant force. A demand to participate differently rather than an outright refusal of participation. Breaking, remaking, becomes to share something in common that appears aberrant. The quiet force of the not-quite-right, a mundane and bathetic offering that is privileged precisely through its very proximity to an ennobling decision to do something other.

A motion of the otherwise. A command of thoughtful indifference. A re-entrenchment of the productive object at the heart of something. Starting from the relation of the object, the hand, the common dwelling. Outwards moves the gesture of making. The simple object first, or rather the hand-sized object first. A human-scale part. From the part comes the relations of production, the space of the dwelling, the structures of a rudimentary sociality, all spilling out of a common endeavour of cyclical productivity. Microcosm of perverted immanence, short-circuit of capital-logic. 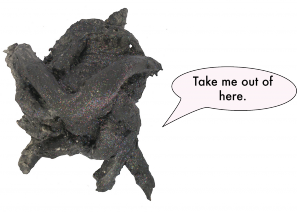