In ontological terms, Harman’s relations between objects always constitute new objects. Removing relation is therefore a reconfiguration and production of multiple new relation-objects. Reconfiguration moves far beyond the limits of the object-collective however. Object relations are not a closed system, but a link of multiple, oblique systems.

Relation would ripple and shimmer. The guarantee not just of the possibility of change, but the invocation of change as necessary and continuous. Not a static world of object stuff then, but a mobile, inflected world.

Object-in-the-sea, absent-relation object, memory object. All objects, and all participant in the world. Drawing out this sprawl, relation after relation, objects appear necessary just to take on some of the labour.

There must be in this process of throwing-away a double conception of loss. Following the split between epistemology and ontology, loss occurs in two registers. A human-centred reaction to the missing object, and an ontological event that constitutes multiple new sensual contiguities and real object relations. Both ameliorated in some way however: the event of disposal is always generative of something else. 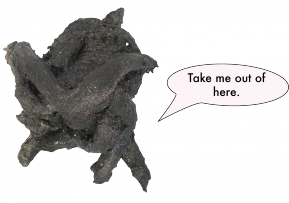