Object, epistemological break.
It is not too hard to imagine a confounding object, the stance of which would engender a strange encounter. Comprehension stretched, tenuous, grappling. A situation from which regularities of thoughtful encounter are pulled at. Objects come often as familiar forms, often enough that with difference comes a pervasive countenance of irregularity.

Confounding object, confusing object. An object such as this could do at least two things here: trouble epistemology, consecrate a new potential ontology. Meillassoux sketches out an object such as this, the arche-fossil. A propositional structure that positions the human-sun character out of place.

Yet such an encounter need not be so radically staged. Harman gives an alternative. The broken tool that comes from Heidegger does the same work. It is the confusion of the thing out of place, the thing that comes out of its place to appear all the more strange. The labour is always the labour of the object. The labourious procedure of finding leverage. Trial and error perhaps, but enough times and something engages. The object snags attention and the edifice is called into question. This epistemological orbit might just be a perverse reverie. A lapse into onanistic privilege because nothing has quite yet snagged enough. 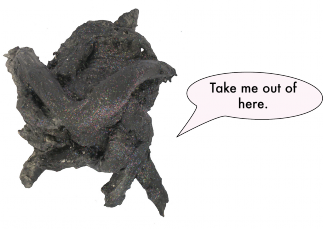